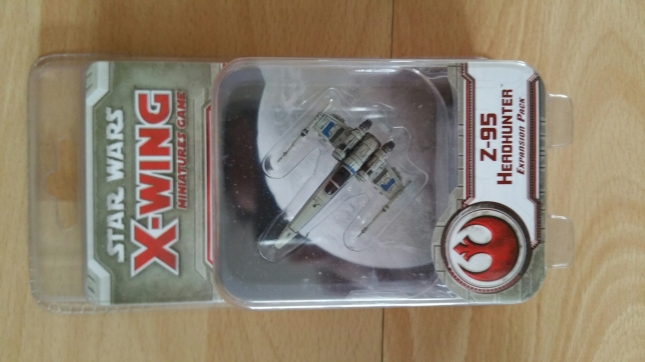 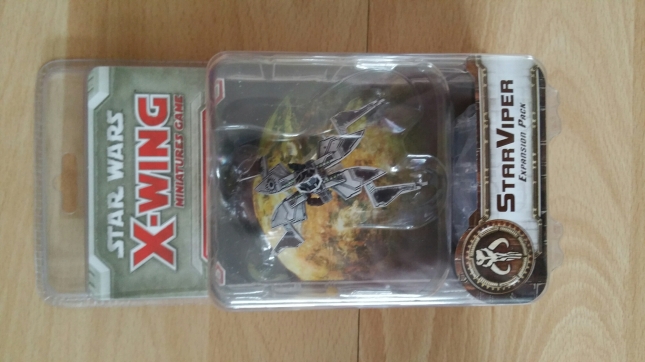 So tonight in the Mancave I’ve been attacking the remaining pile of Star Wars X-Wing stuff that had accrued during my month off. I had a pair of TIE Bombers (Imperial), a pair of Z-95 (Rebel), an M3-a Scyk Interceptor and a Starviper (both Scum and Villainy) to open.
Mitch Dunton had a spare Starviper (for the Scum and Villainy faction) going so I picked up that last night at NAGA. I also had that to open.

Good times! Lots of new ships to test and play with.

Tonight at NAGA I was taking an old LARping buddy of mine who had recently moved into the area along to meet the guys and see what NAGA was like.  He’d expressed an interest in playing Star Wars X-Wing so with that in mind I booked a table and came up with an idea to show him the ropes.  Initially I consulted with fellow Hairy Gamer, Tris, who being a huge Star Wars nerd and all round X-Wing guy gave me some advice.  The plan was simple, two fleets using “big recognisable” names from Star Wars that  Wayne could choose from.  As the ships for both fleets were put on the table Wayne decided he’d take control of the Rebels which were as follows:-

That obviously left me with the Imperials to fly and my fleet to face those Rebel scum would be as follows:-

The idea was that most of the pilots in this battle participated in the Trench Run from Star Wars:A New Hope, so they would be something a fan of the franchise would understand and have “seen in motion”.  The only exception being Boba Fett, who wasn’t there but everyone loves Boba and I included him rather than spend those 39 points on more TIE Fighters.  At least this way Wayne would see the difference between high skill pilots and low skill pilots, big hull and shield ships versus no shield ships, hard hitting 360 degree arcs and 90 degree fwd arcs.

With our fleets decided we setup.  The first turn was quite slow as Wayne was new to the game.  There were some mistakes made and Actions forgotten but as we went along I reminded Wayne.  I was getting him into the habit of taking Actions even if he couldn’t do anything in the Combat Phase……so that later taking those Actions would feel like second nature to him.  The two fleets tentatively Advanced and I encouraged him to take at least one of each Action available in his fleet if possible so I could “learninate” him and explain what each action did.  With no Combat after turn 1 we had an opportunity to build up the learning turn by turn.  We took our time and I explained how the Maneuver Dial and templates worked.  It made sense to him.  I also covered some basics like crashing into other ships and obstacles such as asteroids.

We also had a number of named pilots with unique abilities so as we deployed and moved I explained how Wayne may way to use those abilities.  He was flying “Dutch” Vander with a wingman of Biggs Darklighter.  Biggs can take an attack if he could be targetted on behalf of “Dutch” and when “Dutch” takes a Target Lock action another friendly ship within range 2 can also acquire a Target Lock.

As we made our way through turn 2 the two fleets closed on each other.  Boba’s Firespray and Backstabber and Black Squadron Pilot TIE’s advanced on Dutch and Biggs on Wayne’s left flank.  My second Black Squadron TIE and “Howrunner” advanced into the asteroid field ready to take on his YT-1300 captained by Han Solo with Chewbacca.  Down Wayne’s right flank father and son advanced on one another as Luke Skywalker left the safety of accomanying Han and went for Vader in his TIE Advanced.

Now we were in a position to fire and we slowly made our way through this.  The process was explained that unlike maneuvering we now give the higher skill pilots an opportunity to go first.  Starting with our 9’s.  As we both had a pilot skill 9 captain the first shot was determined by Initiative.  The Empire always get Initiative in ties so Vader shot first.  At long range Hans’s YT-1300 gains an additional defense die.  We roll, we modify results and we compare final results.  This process continues until we finish the round.  I explain how Target Locks and Focuses work along with Evade tokens.

All in all a good game was had and Wayne picked it up very quickly.  In hindsight both Luke Skywalker with R2D2 and Han with Chewbacca were a little tough to break down and despite an impressive showing from a resilient Black Squadron Pilot I couldnt break down that YT-1300.  In the end after more than 2 hours of playing it ended up with a fully hulled and unshielded YT-1300 versus my 1 Hull point Black Squadron TIE.  If I could get close enough to fire Wayne would get the first shot and probably destroy me.  It was getting late and we were on opposite sides of the board so to finish the game off I displayed what happens when a ship lands “off the mat”.  My plucky TIE took one for the team and flew off the board so we could both get home.

I’d like to think Wayne enjoyed the game.  He was a little suprised at the cost of some of the components especially in the aftermarket such as EBay.  He seemed to like the fact that playing the game did not mean he had to invest as heavily as he would have to in other games such as Warhammer 40k or Warhammer FB and he could only buy 2-3 ships and play.  I’m thinking of doing a Star Wars Armada demo next week for Wayne if hes interested?

Its been a very Star Wars month in the Mancave as I did a review/deboxing of my Star Wars Armada, did a demo for Wayne of Star Wars X-Wing and yesterday my Star Wars Imperial Assault game arrived.  Im seriously considering running a campaign for a few mates at Chez Marden once a month.  I currently play in one at NAGA and really enjoy it.