Apologies to everyone in Mancave-land as I haven’t posted in about a week a lot has happened.  Firstly its been the birthday of two important people in my life in the last week.  Last weekend it was my youngest daughter, Phoebe’s, birthday and this weekend just gone it was my better half, Lucy’s birthday.  Happy birthday ladies!

So what has been going on then?  Well firstly after nearly two years of waiting my copies of AvP:The Hunt Begins finally arrived in the Mancave following a haphazard and uncommunicative Kickstarter.  I’ve enjoyed limited success with Kickstarters and to be honest this entire experience has left a rather bitter aftertaste for me.  I’ve watched as “limited edition Kickstarter exclusive” copies of a game I and many other have funded and made possible made their way to retailers before we’d even been given a sniff of the game….so much for our Limited edition copies eh?   Everything that made our game exclusive is now anything but.  Regardless of that fact my two copies eventually arrived…only 9 days after I could have walked into a FLGS and bought it cheaper.  I’ll do a full review some other time as I’ve now punched all the card elements and started assembling models from one of my copies.  The other copy I gave to Hairy Gamer and long term geek-mance Tris who is still waiting to receive any semblance of notification for his AvP Kickstarter.

Monday saw the monthly Imperial Assault campaign swing into action again.  Dave returned to the fold to pick up his sniper and get his kill on.  Recently we had enjoyed moderate success in the campaign picking up a few close but hard fought wins.  This session our objective was to attack and deactivate a secret Imperial Research Facility and achieve this within 5 game turns.  The Facility was heavily fortified with armoured doors and Stormtroopers defending it.  With no idea what was within we had to clear any resistance to us from outside and get through it as fast as possible.  To be honest we were not expecting success and thought Alan, our GM, may have some nasty surprises in store for us inside.  By the end of turn one our organised teamwork had allowed us to kill five Stormtroopers and Stun and destroy the Probe Droid guarding the door.  Next turn we blasted through the door and my smuggler stressed herself to race through the structure and see what was lying in wait.  Everything was going to plan as everything Alan deployed got very quickly destroyed by our Soldier with his Havoc shots.  Everything happened so fast I didn’t even get a chance to take pictures and for that I apologise again.  We were outrageously successful this month and I’m sure that next month Alan’s Imperial’s will come back stronger and nastier.  With only 3 sessions left until the end of the campaign I have to say that I’ve really enjoyed participating in it and will hopefully run one of my own once this is finished.  Dave Baxter and I were also chatting about the skirmish variant of the game so with any luck you may see some reports of that on the Mancave as things progress.  Watch this space!

T stands for TIE-Advanced.  This week saw me finally get my dirty Imperial hands on Darth Vader in his TIE-Advanced for my Star Wars X-Wing collection.  I’ve been after a TIE-Advanced for a while as it was one of the few ships I was missing plus with the Imperial Raider inbound in August it was going to improve the Imperial Navy.  I may even get to use it next week in the NAGA X-Wing League match I have scheduled with Brent Jay on Wednesday.

T also stands for Terminator:Genisys.  Recently I deboxed and reviewed this game by RiverHorse Games in a blog post but hadn’t up until last night had the chance to do much more to it.  During the May trip to Salute 2015 Hairy Gamer Tris and I watched in awe as Warlord Games ran a competition to see who could assemble the Terminator Endoskeleton miniature from this game in the fastest time.  I don’t know what the final timings were but people were able to assemble these snip and clip miniatures in about 40-50 seconds each.  Armed with my snips, some files and a camera I set about assembling the 10 Terminator Endoskeletons, 5 Crawlers, 16 Resistance soldiers and 1 Limited Edition white metal Kyle Reese (athough it should be resin) in their varied configurations.  Sadly only 2 variants of the Terminators are supplied but the Resistance have a reasonable amount of customization with 4 different poses and 6 different weapon options.  .  I wasn’t really trying hard to do it quickly but a little under an hour later I had a full set of assembled miniatures that I was happy with and could game with.  I must admit that they were very easy to assemble and get to grips with.  Once assembled they do have the look of little green Army men about them.  They aren’t without their issues (some of the faces look a little like Nuclear disaster victims) and its nothing that a spot of glue here and there and maybe some green stuff filler cant fix but for a first pass they will certainly do.  Next will be to get some paint onto them.  I imagine painting Terminators will be as easy as painting Xeno’s from AvP and Resistance fighters will be similar to USCM Marines from AvP.  I can use similar techniques and styles for both although I imagine the results will be very different.  I posted pictures of my progress on my Facebook page last night. 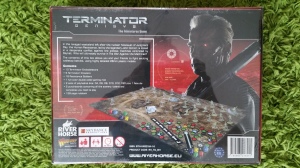 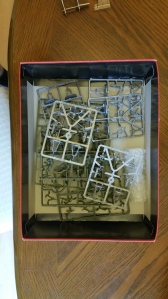 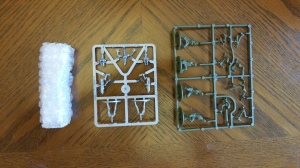 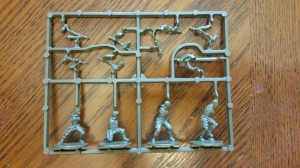 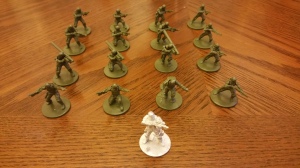 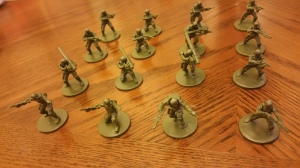 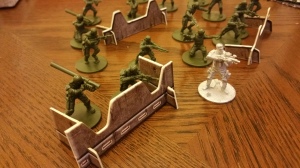 Lastly, my final T stands for Trek.  Tonight I managed to debox my last few ships – two copies each of the Federation USS Prometheus, Klingon IKS Ning’Tao and Bajoran Ratosha from Wave 15 of Wizkids Star Trek Attack Wing.  I had previously previewed these ships on Mancave so all that is left for me to do is post some pictures and total up the damage.  I would post the same pics in this blog post but for some reason WordPress is being a bit funny with me so I may use links instead:- 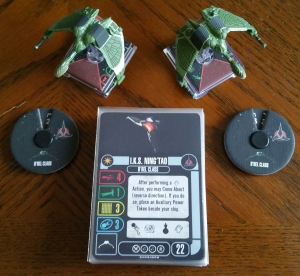 I find myself sitting on 287 ships now including at least 2 of every ship (some as many as 4 and one 15!!!) and 3 of every prize and Limited Edition release available.  I have 21 ships awaiting purchase of a new storage cabinet/display case so they can be put away properly.  So a little trip to Ikea may be required this weekend to buy another Detolf Display Case although I have been trying to source some spare shelves to mod my existing units.