Some of you may know that I occasionally get tempted by a Kickstarter here and there……..well I backer one earlier this year which Ive mentioned a few times, The Devils Run:Route 666 by Word Forge Games.  Its very Mad Max in its style and inspired by older games such as Car Wars and Carmageddon and Dark Future.  I’ve been itching to give it a go and luckily on Tuesday night I managed to get out to Leamington Games Club to meet with one of the brains behind Word Forge Games, Mark Rapson. 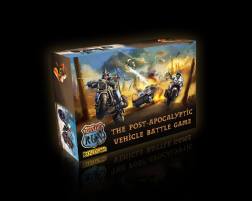 The idea was that we’d have a run through of WFG’s recent successful Kickstarter for The Devils Run:Route 666.

I’d had a quick flick through the rules and had a vague idea how the game should work. There’s no better way to learn a game than through playing and I hadn’t pushed any miniatures around in anger so I was keen to give it a go.

We setup using the miniatures in the core game with me playing Laws Haulage and Mark taking control of The Hauls Angels. The scenario was straight from the rules with or respective gangs racing to grab an objective/token.

Each gang had a car sized miniature, a bike and a trike/buggy with each having its own abilities and benefits. The Law Gang had a twin minigun buggy whilst the Angels had a flamer equipped trike.

Having won initiative I opted to setup first placing my fastest vehicle ahead to race off and grab the objective. My buggy sat out on the flank where the rougher terrain didn’t affect its movement. The car came up the rear to hamper Marks gang.

The mechanics are deceptively simple and within one round I had them down and was quite happy with how things worked. The game is refreshingly easy to learn and really makes me glad I backed at an early stage as my decision to do so was validated within moments of playing.

The game time isn’t too long and setup isn’t a laborious activity making this game a perfect tabletop game. The ease with which rules are learnt and shown means anyone can get into the game in an evening and still allow plenty of time for a couple of games.

Having narrowly lost my intro game Mark offered me the chance to help playtest a scenario involving the Brit Attack gang and their Mini’s.

My Brit Attack gang consisted of all five named Mini Drivers. Michael, Ronald, Bill, Charles and Keith and their fleet of Minis were to attack a convoy of Marks gangs vehicles and destroy a target vehicle.

Mark gave me a Mini to take away as a thank you and it is an amazing miniature. I’m looking forward you assembling him and slapping some paint on him at some point. It’s a little smaller than a Matchbox or Hotwheels scaled vehicle as my attached picture shows but not detrimentally so. It’s the actual wheelbase of the mini that is key in TDR:R666 rather than the size of the car. A Mini or “Muggy” should be roughly 35mm by 35mm.

My Minis were quick, nippy, evasive and worked well as a team. They are everything I hoped they would be and more and I’m so glad I backed the Brit Attack. I’m looking forward to future games testing out the other Brit Attack models such as Cab Croozers, Lord Hood and the Beefeaters. I also backed The Hunters and shall look forward to testing them out too.

For TDR:R666 backers you will not be disappointed in this. Mark and Co really have developped a great world to play in and have some great plans for future expansions. You may even recognise some of the White Van Drivers for Brit Attack when they get released!

The game is slick, has beautifully manufactured miniatures, a simple elegant ruleset with some flavorful and characterful models and characters in game. If you enjoyed Dark Future or Car Wars you will love this game. The scope for personalisation and modifications to you gang is almost endless and will provide you with years of gaming for very little outlay.

As part of the Hairy Gamers on Facebook I get to see a lot of Kickstarters for various games made my friends and companies and if Im honest I very rarely ever commit to these unless they truly interest me.  Recent investments include the Battlesystems Sci-Fi Terrain and PRODOS AvP:The Hunt Begins, one of which has been delivered and the other is in the final stages of delivery following approval by Fox.  Im happy with both.  I like Kickstarter as a mechanism for funding projects and its good that backers can receive exclusive content and artwork etc that your average joe-gamer buying via retail wont receive as a thank you for backing the project.  Kickstarter works.

Recently a game appeared that made me sit back and take notice, and I’ll tell you all why.  As a younger gamer I played Games Workshops Gorkamorka and Necromunda.  I also played a Steve Jackson game called Car Wars.  It used cardboard vehicles and had a rather complicated rules system.  Some small part of me wished I could combine all three into one awesome game using customisable miniatures involving gangs attacking eachother on the road in a post apocalyptic world…..a bit like Mad Max.  Nothing ever really filled that void for me as a gamer….until recently. 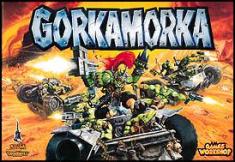 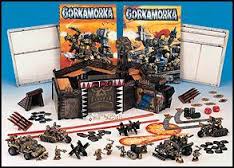 Via the rather excellent friend of the Hairy Gamers, Mark Rapson, I became aware of a new game about to hit Kickstarter.  It was perfectly timed given the reboot to the Mad Max franchise and the success of Sons of Anarchy.  It had everything I had been waiting for…..cars, guns, gangs, combat, crazy post-apocalyptic characters all in one neat package and even better the miniatures would be produced by PRODOS a company well known for its resin miniatures and excellent customer service.  Seemed like everything was in place was a successful Kickstarter.  The product?  Well its The Devil’s Run: Route 666 by Word Forge Games. 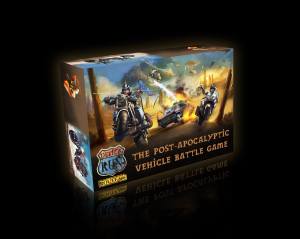 The Devil’s Run: Route 666 is a 2, or more, player family game of post-apocalyptical mechanical carnage set in the near future; a dark and barbaric place, where World War 3 has seen the demise of the USA and Russia. Twenty years after the war, those that have survived must fight for everything. Post-apocalyptic North America is a feudal land run by numerous gangs, the most powerful of which control the interstates and rush to win control of the aid-drops (ADs) delivered by the new superpowers; the SRI (Super-Republic of India), the UCE (United Countries of Europe) and Brazilia (formerly South America). Each player controls a gang of ramshackle vehicles and their characterful drivers as they race across the remains of America to lay claim to the aid drops and the riches they contain. Each gang will do whatever it takes to get to the drops first…murder, death, kill, race, win! 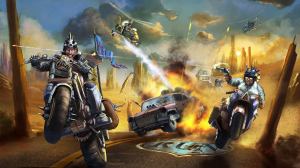 Its a 20mm (1:72 scale) vehicular combat game based on the major interstates of a post-apocalyptic former USA.  You build a gang and fight for control of the roads running your rivals off the road and destroying their bikes, trikes, pick-ups and buggies as you strive to become the most dominant gang.  The game utilises resin miniatures and dice to create a customisable combat game. 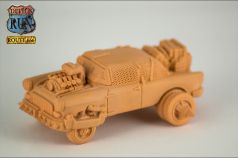 There is a Facebook group dedicated to this game, if you’re interested I suggest that a good starting point!

You can also find a growing community dedicated to custom models and updates and spit-ballin’ ideas for The Devils Run on Facebook too:-

There’s also a YouTube video giving some background behind the game, the look and feel of the product and showing some of the awesome characterful artwork for this game:-

Go take a look!  Get involved and make a pledge!  I have!