Last night at NAGA in Nuneaton I was treated to a Guildball demo by one of the local demo guys for Steamforged and Club Member, Mark Southerd.  He’d been around giving demos to other potential players at the club and I had requested one so I could see what all the hype was about and hopefully get to grips with my team, the Fishermen.  I knew Mark from the LARP scene too and we had mutual friends in some of the guys who had pointed me at Guildball to begin with.  He was familiar with my monthly “gaming on a budget” challenge and knew that I already played/owned Fishermen

Mark brought along his demo pitch “The Proving Grounds” (available from the Steamforged webstore for £34-95 and comes with a neoprene backing for durability and a specially marked bag to roll the pitch up).  It allows you to play games on a 2′ x 2′ area for smaller 3 man per team games or on a 3′ x 3′ area for bigger 6 man team games. 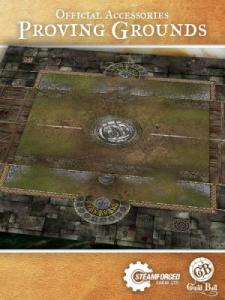 Firstly despite the price this pitch is far better quality than the vinyl pitch I had printed by Pixelart Printing.  It was more of a mousemat type material and for playing smaller games is better.  Sadly as part of my challenge until these items come down in price I wont be able to afford one.  I’m happy with my current pitch but it does limit me to bigger games only. 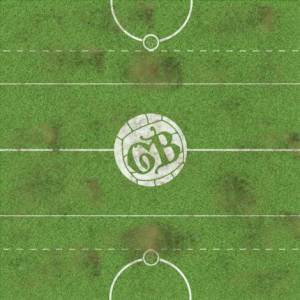 I had already requested that I could use Marks Fishermen team versus a team of his choosing as I already owned the Fishermen and wanted to try and get to grips with their play style.

Mark chose the Alchemists and subbed in a Union player, Hemlocke.

The Union are like mercenaries and each player will play for the Union Team AND some of the other existing teams.  For example Hemlocke will play for both Alchemists and Fishermen.  I opted to fill my roster with Salt and Shark (in bigger games both the team mascot and Captain must be chosen), Kraken, Jac, Siren and Angel.  Siren, Angel and Salt are a little bit squishy compared to other players in the game but they have good synergy within the team and allow me to pull off some rather clever plays.  The Fishermen are all about speed, maneuverability and quick scoring.  They can drag opposition players out of position and pull their team mates away and out of “engagement” with enemy players.  I’d be attempting to use these abilities a lot as I didn’t want to get drawn into a fist fight with Marks team. 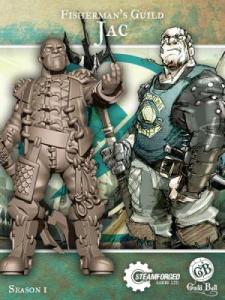 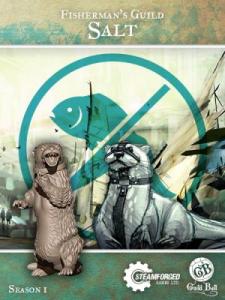 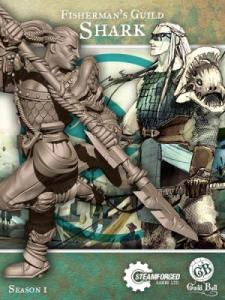 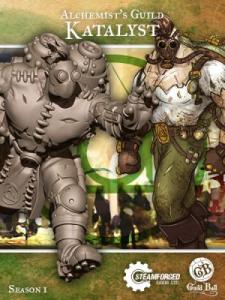 The Alchemists are all about control of space using Area of Effect (AOE).  they can throw smoke bombs, they can combo some nasty conditions, set your players alight using fire.  Theyre a good opponent for Fishermen due to the way they play.  They’re about denial of opportunities by restricting where players can move and attack.  They are quick on their feet and capable with the ball, but not as resilient in combat as other teams. They excel in the early to mid-game due to their ability to cover a good amount of space.

On offense, Alchemists can use their AOEs almost as additional models in order to restrict the counter play options of their opponent. No one wants to charge the Alchemist with the ball if you have to go through an acid cloud!  On multiple occasions Mark dropped smoke bombs in front of his goal to deny clear shots from the faster, more maneuverable and better kicking Fishermen.  Damn him!

The game started tentatively with both teams probing and prodding whilst I got used to the rules and my team.  I looked at the cards for each player and positioned my team in positions where I felt I may be able to get a benefit for the synergy between them. 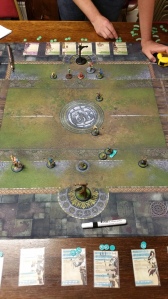 The Fishermen set-up closest with the combined Alchemists/Union at the far end. 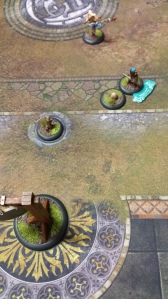 Angel collects the Kick off.

The game started with Mark’s Alchemists kicking off to my Fishermen.  Having assigned influence to all my players I was then able to activate one of them and get the game going.  My team advanced quickly and Angel collected the ball deep in my half.  Kraken and Siren advanced on the left flank and Jac and Angel on the right.  Shark moved forward into centre field where he could benefit my team most.  As Marks team advanced his bigger tougher players pushed up against Kraken and Siren as Mercury set Shark on fire causing him to take damage at the end of the turn.  Hemlocke advanced on my right flank only to be engaged by Jac and latterly Salt who was pulled in to support Jac as he attacked Hemlocke.

As Marks plan became revealed it appeared he was going to use his players abilities to disrupt and damage my team as much as he could.  Marks team were very strong and full of damage causing abilities.  When a player takes damage they mark it off on their player card.  Once a player has taken as much damage as their card shows they are removed from play.  Each player has a number 1 and 2 on their health chart.  When a player returns to play using 1 Icy Sponge token they come back with as much health as the number 1 on their health chart.  When they use 2 Icy Sponges they come with the health indoicated by the number 2.  its a simple but effective system.  Due to the lower amount of hits my players had the less health I couldnt be drawn into a prolonged fight with Marks players.  I had to score quickly and keep away from his heavy hitters Katalyst and Mercury.

Kraken and Siren engaged Katalyst and Vitriol on my left as Mercury and Shark went toe to toe in centrre field.  Flask swept along behind the Alchemists lines blocking Marks goal by dropping smoke bombs.  Once they had dissipated I used Kraken and Siren to move Marks players aside as Angel advanced and shot for the goal.  GOAL FISHERMEN!!!!!

I had the momentum and was now ahead.  Scoring gave me 4VP and I had to get 12 to win.  4VP for a goal and and 2VP for putting a player out of action so it wouldnt be hard for Mark, the better and more experienced player to close that quickly.  Some bad rolling had left almost every member of my team suffering some form of damage so I had to be careful not to commit recklessly and to choose my activations carefully.  The kickoff scattered into mid field and Mark again set about setting my players on fire and poisoning them.  The damage added up quickly.  Angel was taken out by a severe beating from Katalyst.  He poisoned her, set her alight and removed her from the game.  He was quickly building momentum.  I had to stop him collecting the ball or he’d get an attempt at goal.  2VP to the Alchemists for removing Angel from play.  I was more worried about the loss of her skills and influence so had to get her back in the game as soon as possible.  When a player is removed from play they are granted an Icy Sponge token.  This means that when they get to the Maintenance Phase you can spend an Icy Sponge to return your player to the game at reduced health.

The Fishermen aren’t the hardiest of teams but their armour does help.  Siren was attacked by Mercury and the moment she activated she would be set alight…so I attempted to not activate her until I had a chance to either force Mercury away or dodge Siren away using the abilities of my other players.  Kraken used his influence to push Mercury away which granted a Momentum token too.  Shark advanced towards the Alchemists goal and used his Legendary play to affect all 5 of Marks Alchemists players who were all within 8″.  Now with their movement reduced my superior speed could be used.  Siren lured one of Marks defending players aside leaving a gap for my captain to move through.  Shark was now unmarked and upon activating rushed forward to grab the ball, he collected it and having evaded the AOE’s of Marks players fired a speculative attempt at the goal.  GOAL FISHERMEN.  That goal took the score to 8VP Fishermen versus 2VP Alchemists.  I was one score away from securing a victory.  I would first need to retrieve the ball and then find a way through the mass of players blocking the goal.

I used Angels Icy Sponge to return her to play.  When a player is returned they begin play at the edge of your teams deployment zone and can jog into play immediately.  I didnt want to gift mark an easy 2VP by making Angel easily caught by one of his players.  Salt and Jac were dealing with Hemlocke on my right and the left flank was advanced way upfield.  I re-entered far from any other player to preserve the influence she brought.  I would need her additional influence if I was to get the ball and score again.  Having secured the activation Mark grabbed the ball with Vitriol and threw down some smoke grenades to make it difficult to see of affect her.  Shark and Siren advanced chasing.  Flask was lurking nearby providing support and making it hard for Shark to affect Vitriol.  Siren had one last trick up her sleeve.  She was able to seduce Vitriol into passing her the ball.  With no intervening players it was a simple roll to take the ball from Vitriol and within close range of the goal I spent my momentum and final influence point on Siren to shoot at goal.  Score!  GOAL FISHERMAN!!!!  12VP to 2VP.

I had secured a difficult and costly win for my Fishermen.  I was reasonably happy but knew had I played a more “fighty” team I may have lost more players.  I was happy with how the Fishermen played and satisfied that I could happily use them again in the future and had invested in the right team for me.  Shark was awesome, Siren had been worth using and despite my love of Kraken I hadnt seen him live upto the potential I hoped he had.  Salt and Jac proved a useful combination when tag teaming against a lone isolated attacker in Hemlocke.  I had spread the goals around and seen some of the useful abilities my team could do.  Sharks Legendary play had really turned the game by trapping all 5 of Marks Alchemists in a net and reducing their movement.  This reduced movement had allowed my faster team to move through and past them and to isolate the ball carrier beforre stealing the ball.

I had a great evening and props go out to Mark Southerd who had taken the time to talk me through the finer points of Guildball.  We had a good chat about the future of Guildball both in general and at the club.  With Season 2 approaching and at least 4 new players coming up for the Fishermen I would be kept busy going forwards and have plenty to spend my “Gaming on a budget” pennies on.  We also discussed which Union players may suit the Fishermen and give me more play options.