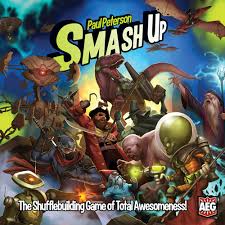 Another review for you all.  As the Hairy Gamers I reviewed AEG’s Smash-Up game and its first two expansions, Awesome Level 9000 & The Obligatory Cthulhu Expansion earlier in the year.

Anyone looking for a fun party game for 2 or more players (even better when you’ve had a drink) should check this out!

Recently the Big Geeky Boxset and Monster Smash expansions have been released.  Full reviews will follow in the future.